How is pressure mapping on a saddle performed? 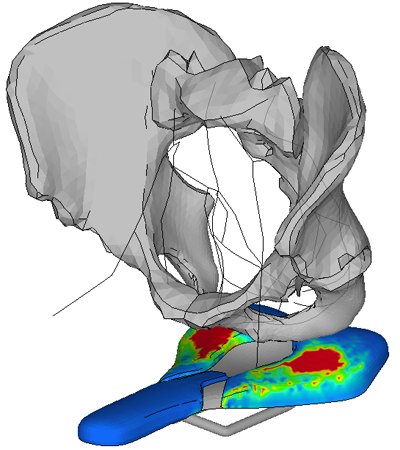 The pressure distribution is displayed by colour: blue represents low pressure, then the pressure rises from turquoise through green, yellow, orange to red. 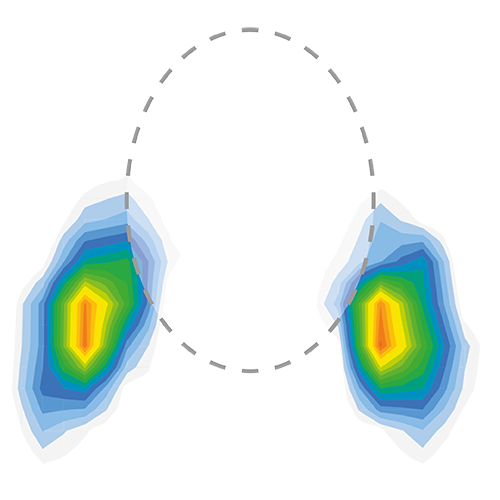 The two-stage wave form fits perfectly to the mostly bulbous ischial branches and offers at the same time an optimal relief of the sensitive structures of the perineal area. The SQlab Ergowave ® is the result of a three-year research cooperation with the Frankfurt University of Applied Sciences..

The pressure mapping diagram shows an optimal pressure distribution from a medical stand point on the sitbones (red) and pubic bones (orange/yellow) and almost no pressure in the perineal area. 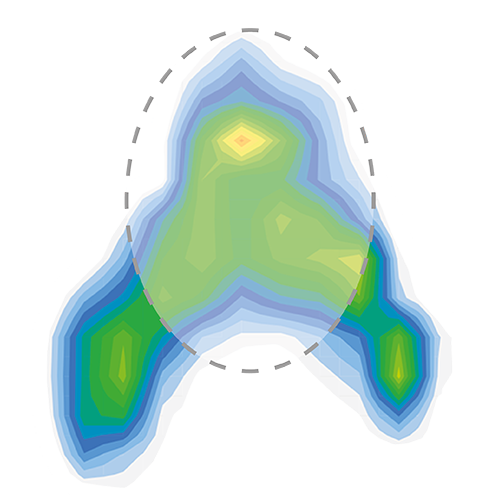 Pressure mapping of an arched saddle

Shows increased pressure (yellow to red) in the perineal area and in the area of the pubic bone arch.

Pressure mapping of a saddle with cut-out

Shows concerningly high pressure peaks on the sides of the perineal area, where important arteries and nerves are located. In the centre the blood is able to flow well, but numbness will still be an issue.

Pressure ulcers in the perineal region!

We have only been able to find reports of this problem in connection with the hole saddle design.

Our measurements, investigations and experiences confirm that this problem has not yet occurred with our stepped saddle design with the saddle width system. The lower-lying saddle nose normally reduces even the lateral pressure on the perineal region more than sufficiently.

As early as 2015 (Mountainbike Magazine 6/2015), a sports ergonomist reported the risk of pressure ulcers caused by the edges of large-hole saddles.

Issue 4/2019 once more reports that scientific studies have found high pressures at the edge zones of the saddles with holes.

How can this be explained from a medical point of view?

Pressure sores are familiar to people who experience severe pain or have restricted movement, or both, to such an extent that they develop "bed sores", also known as decubitus.

(If a pressure load above the capillary pressure threshold persists, the cells are undersupplied with oxygen (hypoxia) and nutrients. The oxygen partial pressure drops to 0 mmHg (ischemia) and toxic (acid) metabolites accumulate. The tissue necrotizes and nerve cells suffer irreversible damage. (Https://de.wikipedia.org/wiki/Dekubitus)

The study by Dettori JR, Koepsell TD, Cummings P, Corman JM would appear to confirm this. In this study, the participants of a 320 km cycling event were interviewed. One of the results was that cyclists whose saddles had a hole in them had an increased risk of suffering erectile dysfunction. Particularly if numbness occurs at the same time. (Erectile dysfunction after a long-distance cycling event: associations with bicycle characteristics. J. Urol. 2004 Aug; 172 (2): 637-41)

We assume that pressure ulcers are actually a rare occurrence during cycling.

Before tissue and nerve cells die off, the pain would most likely prevent the cyclist from continuing. According to the study, significant danger arises when numbness occurs in combination with the ambition to finish the race.

Problems occurring far ahead of the development of pressure ulcers are apparently more frequent. Before the tissue and the nerve cells die off irreparably, it can be assumed with a high degree of certainty that strains will have already occurred, i.e. the combination of pressure and shear forces on the perineal area and the nerves and blood vessels present there can lead to a reduction in sexual performance.

The findings from Mountainbike Magazin largely coincide with those of the study, with the difference that in conclusion, the study recommends not using saddles with holes, whereas according to Mountainbike:

"Even for bikers who wish to ride in the forward-leaning race position for performance reasons, this pressure shift to the edges of a recessed saddle is advisable. Only rarely can pressure ulcers arise here. "

Since, as described above, many complaints can occur before a pressure sore irreparably damages the structures of the perineal area, this recommendation is incomprehensible from a medical point of view.

At least the SQlab 611 active Ergowave comes with the following certification:
"Gliding along as if in a sedan chair with SQlab active ....... and hardly any pressure on the perineal region."

We offer the following payment methods